My Dinner with Jason Coupal

I’ve known Jason Scott Coupal (JSC) for close to 20 years. He’s one of my favourite thinkers and writers. We have many mutual friends. Here’s my recent interview with him. Check out his views on Trump and Trudeau.

WGF: I want to ask how you guys are doing, but let’s start with your Dad. He’s a Canadian citizen living south of Montreal. What does he do and how does the border lockdown affect him?

JSC: I’ve spoken recently to my father. His workload has increased dramatically. He has been a long-haul trucker for the last thirty-eight years, and works for a family-owned company located literally steps north of the border with Champlain, NY. His routes typically take him from Quebec down the Eastern Seabord of the US, most often the mid-Atlantic states. As his company is independent, he moves a variety of goods, mostly refrigerated foodstocks. He used to make regular runs to certain producers–for years, he was solely responsible for keeping the Cora chain of breakfast restaurants supplied with Florida orange juice. He is considered an “essential worker” by the Canadian and American governments, and is thus permitted to cross the border at will.

Dad anticipates a significant uptick in jobs over the next few weeks, and even though he has the luxury of choosing the jobs he wants, I suspect he’ll be on the road even more frequently.

JSC: He’s 77, and although he’s healthier than I ever was now, he’s also survived prostate cancer, blockages in his arteries, and a 3-pack per day smoking habit, which he dropped cold turkey after 50 years once he received the cancer diagnosis. Given the extent of his routes, I’m terrified that he may pick up the virus along the way. He is taking precautions. No hand-to-hand contact with customers, keeping food in the cab so he doesn’t have to stop at restaurants, and avoiding truck stops, which unfortunately means that he has to go without showering for days. Candidly, I wish he would leave the work to younger colleagues, but, as I’ve often said, he’ll likely die at the wheel–and hopefully the truck will be parked at the time.

WGF: How are you and Mark doing? What measures are you taking?

I’m experiencing a species of anxiety I’ve never felt before–poor quality of sleep, long stretches where I’m unable to do anything more involved than scrolling through my phone, and obsessive review of my investments, which is probably the least productive enterprise one can engage in these days. I’m now working at home for the time being, and when Mark isn’t here, the sense of isolation is profound. I’ve limited my contact with other people, and wash my hands frequently, but that’s about it.

Mark works in a grocery store, and business has increased exponentially over the last few weeks, so avoiding contact has been virtually impossible. He’s wearing gloves and using hand sanitizer frequently, but that’s about all he can do.

WGF: What are you noticing in your town and neighbourhood? Paint us a picture of what you’re seeing. Are people taking Covid 19 seriously, do you think?

My neighborhood, which is quiet on the busiest days, is virtually deserted. Other than seeing a random child or dog walker on the street, we’re entirely alone. Out on the main arteries, there’s still a fair amount of traffic, but most of it is either heading for the workplaces that are still open (and those are dwindling by the day) or heading to the grocery stores or pharmacies. I’m not sure that the people in my community, a majority of whom are Trump supporters, are all taking it entirely seriously, but certainly some are–they’re putting out notices on our community website offering to shop for seniors and the disabled, for example. As for the others, whether they take it seriously or not, they’re staying indoors, because there’s simply nowhere to go. 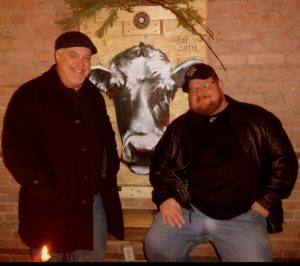 WGF: You’re a lawyer. As you mentioned, Mark works for an international grocery chain. What impact has Covid 19 had on the work you two do?

The Florida Supreme Court entered a series of orders restricting access to court facilities throughout the state, and the individual judicial circuits have banned in-person activities for the time being. I attended my last in-person hearing last week, on March 18th, and during the proceedings, I was forced to stand six feet away from my client. My law firm discontinued all in-person consultations and client meetings earlier this week.

I stayed home today, and will likely be here for a while. I actually prefer telephone hearings when I can get away with them, and phone consults aren’t a problem, either, so I don’t foresee any adjustments to my daily routine.

Surprisingly, business is booming for me–I was retained by four new clients last week, which is as much business as I usually get in a decent month.

Mark has actually been racking up overtime, which is virtually unheard of at his store. They’ve had to restock the store every day, as opposed to several times per week under normal circumstances. The customers are particularly unpleasant, which doesn’t surprise me in light of the crowds and shortages of many items–besides paper products, it’s hard to keep meat, dairy, and other staples in stock. A few days ago, the store manager caught a woman trying to steal the hand sanitizer left out for customers. I don’t know how he manages to stay calm in that environment.

WGF: You both travel a lot. I think of the trips the four of us have taken together: Italy, Boston, Amherst Island (near Kingston, Ontario). Remember that trip to St John’s, Newfoundland? That trip to Con’s family’s boat tours, in Bay Bulls? You, in particular, get to Canada often. How will the travel ban affect your lives?

Significantly. I was in Edmonton, Dallas, and Austin last month, and that looks to be the last of it, with the travel restrictions and financial pressures we now face. I had planned to visit Finland over the summer, and take a few brief trips throughout North America in the fall, but those are probably going to be put back a year or more, assuming we can go at all.

WGF: You’re a political junkie. Your middle initial is a typo. Your middle name is “Geopolitics.” What are your thoughts on what’s going on with your government’s response to the pandemic?

JSC: What response? Our government is a vacuum, led by an incompetent buffoon who consistently downplays the gravity of what we’re facing, and whatever it actually ends up doing will be too little, too late. Had it not been for the efforts of state governors (particularly Newsom of California, Cuomo of New York, and even DeSantis of Florida, who’s a Trump acolyte), there would be anarchy.

WGF: How do you compare that with what you see Canada doing?

JSC: The Canadian government seems far more engaged than ours, and is clearly much better at coordinating relief efforts than we are. From this vantage point, Trudeau seems to be doing a fine job, and the fact that he’s been functional while his wife suffered from the virus and he was self-quarantined earns him even greater respect in my eyes.

When we write the history of this pandemic, Justin will be judged favorably, I believe. And he’s far more capable at inspiring citizens to pitch in and do their part than our leaders. But this is nothing new, Grant, at least not since 2016. If I had a choice, I’d prefer Doug Ford–hell, even Rob Ford– as our president over Trump, which is one hell of an indictment.

WGF: You’re both sports junkies. You love your hockey and baseball. You attend a lot of NHL and Major League Baseball games. And you love to go to Disney, in Orlando. How will you fill those voids?

JSC: Netflix. Our Kindles. Apple Music. Various household projects left undone since we moved here two years ago. Lots of cuddling, sleep, and other bedroom activities. We don’t drink much, but we may revisit alcohol.

WGF: Are you two hunkered down now?

JSC: Mark is at work feeding the masses, but he’ll be home soon. He doesn’t go anywhere else, other than grocery shopping. I’m home today in my underwear, un-showered, trying to catch up on work, and I think that’s going to be the state I’ll be in for a while (with periodic showers for good measure).