Interview with the mayor of Stratford. (Part 1 of 2)

In late 2019, a mysterious illness began to infect people in the sprawling city of Wuhan, in the province of Hubei (China). It spread fast.  Authorities locked down the city and other parts of the province to try to contain it. By early winter, the death toll climbed past 1,000. Now known as the novel coronavirus (or Covid-19), it hitched a ride with travelers and found its way to other parts of the world. On March 11, 2020 the World Health Organization (WHO) declared a pandemic. By then, 114 countries were reporting cases. More than 4,300 people were dead.

As the spring unfolded, nations went silent: borders were sealed, airplanes were grounded, and people were told to stay apart and stay home. The new mantra:  flatten the curve .

COVID-19 marched on. By June 3, the global death count stood at 388,000, with more than 6.5 million infected. Health officials and the public tracked the numbers in real time . Scientists raced to make a vaccine.

In Canada, everything stopped. Highways and subways emptied out. Downtowns became ghost towns. Some First Nations communities and provinces set up checkpoints to wave away unwelcome travellers. The economy skidded into the ditch, shutting down thousands of businesses and sending millions to the unemployment lines. Schools, colleges and universities closed.  Everything else was cancelled, “paused” (including the NHL) or Zoomed. Like never before, people donned masks and gloves, washed their hands and door handles, and had their groceries delivered. But the virus found chinks in the armour. By early June, Covid-19 had claimed 8,000 lives. Nursing homes were ravaged, especially in the country’s two most populous provinces, Quebec and Ontario. The ticker continued to be appointment viewing.

Stratford, Ontario (pop. 32,000) is world-famous for two reasons: it’s the home of the annual Stratford Theatre Festival and it’s where pop star Justin Bieber grew up.

As summer 2020 approached, Stratford kept COVID-19 in check. On June 3, the local health unit reported four deaths (all of them in nursing homes) and 26 positive cases .

So far, so good, at least on the COVID-19 front.  But peril lurked elsewhere. In late March, the city declared a state of emergency. A month later, the theatre festival, the engine of Stratford’s economy, shut down for the season.

Dan Mathieson, the five-term mayor of Stratford, is involved in all aspects of the economic recovery task force for the city. In late May 2020, he agreed to an interview. It covered many topics. I began by asking him about the theatre festival. 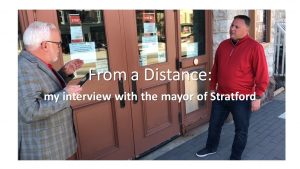