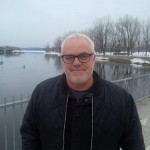 Grant Fleming is an independent journalist. A former reporter and current affairs program host for a major broadcaster, he has won several awards from the Radio and Television News Directors Association of Canada for investigative reporting. He grew up in the Miramichi region of New Brunswick, has lived and worked coast to coast in Canada, and now makes his home in Stratford, Ontario.