Loreena McKennitt and Dr. Marlene Janzen Le Ber, on women and leadership during the pandemic

Loreena McKennitt is a legend. The Celtic and world music singer-songwriter and multi-instrumentalist has turned out 16 studio and live records, toured the globe and earned a staggering collection of awards and honours. They include multiple Junos, two Grammy nominations, four Honorary Degrees and the Order of Arts and Letters (France). She is the Honorary Colonel of the Royal Canadian Air Force as well as a Member of the Order of Canada.

Ms. McKennitt is a leader renowned for her singular determination to build her own business and brand. In 1985, she started the independent record label, Quinlan Road, in Stratford, Ontario. As its soul owner and artist, she has sold more than 14 million records worldwide.

These days, Ms. McKennitt is working on projects tied to climate change. She’s also keeping a close watch on another global crisis: Covid-19.

Dr. Marlene Janzen Le Ber is monitoring the pandemic, too. She’s the Chair of the School of Leadership and Social Change at Brescia University, in London, Ontario. She’s one of the foremost scholars and researchers on women and leadership. She holds numerous appointments, including as an Adjunct Research Professor at the Ivey School of Business at Western University (London). She’s also a trained nurse.

The two women joined me to talk about the ways women are asserting their knowledge, experience and leadership in a time of disorder. Dr. Le Ber started things off by describing the kind of leader we want and need for these times.

Listen to the interview here: 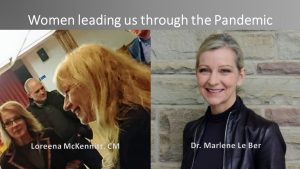